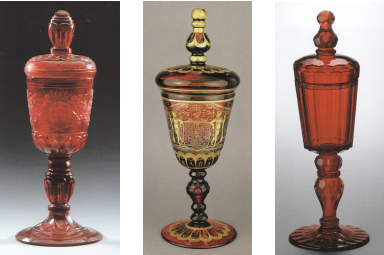 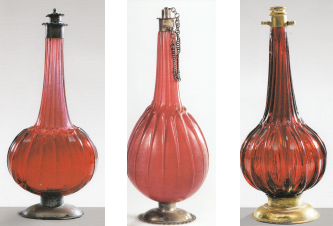 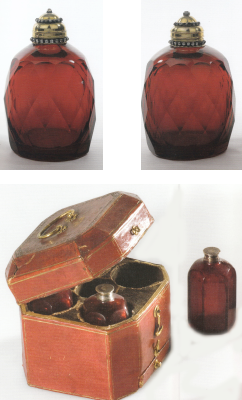 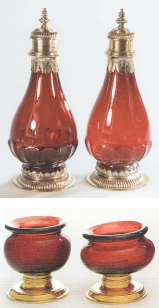 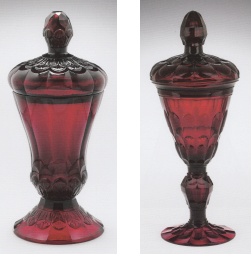 The art of colouring glass with metal oxides is age old. The most common example is the light green colour that comes from a certain percentage of iron in impure sand. Manganese oxide or lignite can be used for discolouring although too much manganese will produce a purple glass. Cobalt will give blue glass and silver a yellow colour. Tin or powdered bones were used to obtain milk-white opaline and copper gives a bluish or red colour. For the early 17th century scientists, nowadays referred to as alchemists, it was a challenge to find the ruby-red material from which they believed the Stone of Wisdom was made and for that reason they occupied themselves intensely with the production of glass. Johann Rudolf Glauber (1604-1668/1670) was a world famous scientist and inventor of Glauber’s salt (crystallized sodium sulfate) that was used as an aperient. He also discovered the effects of potash (potassium carbonate). Glauber often resided at the famous Amsterdam Glasshouse situated on the Rozengracht (1660-1679) which employed Italian glassblowers. Here Glauber’s experiments with glass were applied for the first time. Accidently he had found a blood-red melt in one of his receptacles but it took him years to reproduce this experiment. In 1659 he published the results of his work with glass but, as a scientist, he did not occupy himself with the production of glass objects.

Flute with Gold Ruby Glass overlay, 23 cm, cut and engraved, Saxony, 1715, a hundred years before this technique would become popular in Bohemia.

That was to become the domain of Johann Kunckel, born in Rendsburg, near Plön in Germany, the son of an alchemist, somewhere between 1630 and 1637. He would become the best known central European glassmaker of his time. He was chemist and pharmacist at several courts, lectured at the University of Wittenberg and was in the service of the Swedish King Charles XI who, in 1693, raised him to the peerage. In 1679, in the service of Brandenburg he published a translation of Antonio Neri’s’ l’Arte Vetraria’  together with his own findings under the title Ars Vitraria Experimentalis oder Volkommene Glasmacherskunst. which has been of tremendous importance for the development of the glass industry in Germany. Kunckel himself tested all of Neri’s  recipes in his glasshouse on the Peacock Island in the river Havel, a location that was given him by the Elector Fredrick William I who also funded his experiments. However, although sixteen chapters out of 133 in Neri’s L’Arte Vetraria are about the making of red glass, none of them gives the rich ruby colour that is known as Goldrubinglas and of which Kunckel would become the best and most famous producer. This would never have been possible without the help of John Daniel Crafft (1624-1697) who had worked for ten years with Johann Glauber and knew of his invention. In 1680 they succeeded in securing a continuous production of Gold Ruby Glass by dissolving gold in Aqua Regia, a mixture of nitric and hydrochloric acids and adding that to a batch of pure crystal. The myriads of nano particles that were the result did not actually colour the glass but served as prisms, blocking out all colours from the light but the red. However, the process was unstable. In 1715, Kunckel himself wrote that sometimes he could make five pounds of Ruby glass with one golden ducat but at other times not more than one pound with twenty ducats. Besides, if the particles were too small nothing would happen, the crystal remained clear and the gold was wasted. On the contrary, too large particles would let through too much light and the result would be a brownish, liver coloured glass. Very few glassmakers could afford such expensive try-outs unless they had a rich sponsor. For example, from the thirty covered beakers that are known, only one has not been made by Kunckel’s glasshouse, which is proven by the higher percentage of lime in the glass and the open pontil which does not occur with glass from Brandenburg. Gold ruby glass became a favourite  with nobility which is the reason that museums, based on former royal or lordly collections, are trustee to many objects, often masterly cut and engraved and most of the time adorned with silver-gilt mounts. It was believed that it possessed magic and healing properties which might be the reason that many cosmetic and medical bottles made from this glass. Gold ruby glass was in production continuously from 1680 onward well into the 19th century, but was discontinued between 1688 and 1719, the period of Kunckels’ stay in Sweden. However, the glass of the later production in Brandenburg has a much darker hue. It has been suggested that this is because, after having been out of practice for almost thirty years, the process of making Gold ruby glass had to be re-invented. In the 18th century the use of it gradually fell out of fashion due to the introduction of hot drinks, such as tea, coffee and chocolate and the recently discovered Meissen porcelain, which  was more serviceable, for better heat-resistant,  than glass. This Sachsen porcelain was an invention of the alchemist Johann Böttger (1682-1719), who perfected the experiments of his mentor, Walter von Tschirnhaus ( 1651-1708). Böttger was a man of questionable reputation but nevertheless one of the most famous alchemists of his time. In  1713, in his glasshouse in Dresden he produced goblets with a gold ruby overlay or inner lay in order to use the expensive gold ruby glass sparingly. Böttger had been an apprentice in a Berlin pharmacy from 1696 to 1701 and was than asked by Kunckel to join him in some experiments in his glasshouse. Soon he left for Wittenberg in   Saxony. However, the elector of Saxony took him into custody at his castle at Königstein, probably to make sure that the secret of making hard-paste porcelain would be kept safe. Böttger lived in luxury there and was provided with ample means to conduct his experiments but remained practically a prisoner for the rest of his life.   (J.S.)